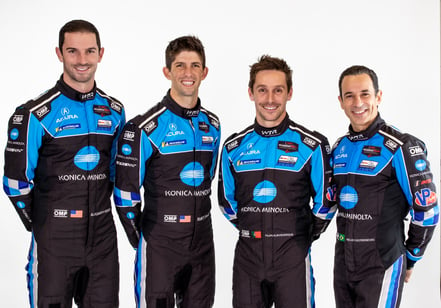 In January, Wayne Taylor Racing will kick off the 2021 IMSA SportsCar Championship with the series season opener, the Rolex 24 At Daytona at the Daytona International Speedway. After a four-year run of successes racing the Cadillac DPi-V.R., the team will now be in the driver’s seat of No. 10 Konica Minolta Acura ARX-05 DPi thanks to its recent partnership with Honda Performance Development (HPD).

But that’s not all that’s changing. The team behind the steering wheel of the legendary blue and black Konica Minolta-painted car will also have a new lineup of drivers. Included on the roster is Lake Mary, Fla.-resident Ricky Taylor who returns to the family team after a three-year stint with Team Penske and world-class sportscar veteran Filipe Albuquerque. 2016 Indianapolis 500 Champion Alexander Rossi will compete with the team in three endurance races, while three-time Indianapolis 500 Champion Helio Castroneves will join the team for the Rolex 24 at DAYTONA, an endurance classic Wayne Taylor Racing has won three of the past four years.

Racing legend Wayne Taylor, the three-time World Sports Car Champion and owner of Wayne Taylor Racing, believes that the new partnership with HPD, coupled with a team that is experienced driving the car, will help take the team to even greater success and more IMSA championships.

"Our new partnership with Acura and HPD provides us with the long-term stability necessary to properly invest in the program and remain championship contenders for years to come,” said Taylor.

With Acura and HPD, he also hopes to add one more milestone to his storied career—winning Le Mans overall.

To keep up to speed with Wayne Taylor Racing, visit waynetaylorracing.com.